Kickstarter at the ready 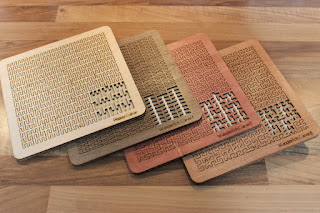 With my Kickstarter campaign ready and waiting for approval from Kickstarter I can positively say that my new puzzles are going to launch any day now. With the puzzles so close I can also announce that there will be another set of four puzzles based on the Peano curve and variations of it known as the Wunderlich Curves.

Curves 2 and 3 are very standard puzzles compared to the original set of four, I simply found the repeating sections and subdivided the puzzle accordingly, it makes them just as tough as the originals to solve. The Peano curve and Wunderlich Curve 1 were quite a bit harder to create and I had to wait for inspiration to strike. The repeating section on those puzzles is obvious but it was hard to find 13 different ways to split the puzzle without making it too simple. I'm sure you'll appreciate the solutions I found and enjoy their fiendish new complexities.

My extended family were subjected to timed testing a few weeks back and nearly all of them gave up within the hours allocated, just one uncle and aunt persisted until they had solved their first puzzle in 2 hours. I have high hopes that this new range will meet the expectations laid out by the first set.
Now would be a very good time to follow me on Kickstarter if you would like to snap up some of the early bird puzzles sets
3mm Birch Games Laser Cut