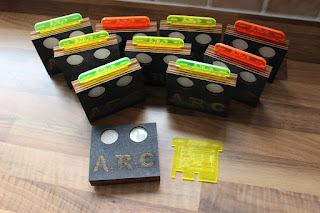 The 'From Shadows' event was held at the Gaol in Oakham and as you would expect from an urban air soft site held in an old prison there are still actual cells available for playing in. Looking for a futuristic way to indicate if a cell is open/closed and being unable to actually lock people in cells I was asked to make these 'door locks' for the event.

Each door lock is a simple arrangement of batteries and LED's, keeping them cheap allowed me to make ten locks within the budget. The state change from locked to unlocked is done with a micro switch that becomes activated once a key card is inserted into the slot at the top of the unit. Once I started pushing cards into the slot though I realised I would be able to do something much more clever for minimal effort. By taking a number of notches out of the bottom of the card and having a similar notch arrangement inside the slot I could set it up so that each card would only open the appropriate door lock. 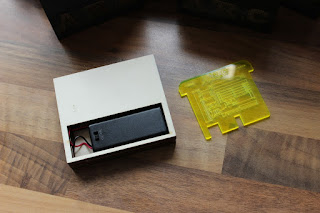 The notches use a binary type system with ten possible positions that the notches could be removed from. The two central positions were always coded 01 so that if the cards were inserted the wrong way round they would not activate. The first eight cards were made by moving a single notch across the other eight positions. Cards 9 and 10 used 1100 0000 and 1010 0000 and looking back card 9 could probably open locks 1,2 and 9. Either way they played well at the event and functional props at LRP events are still big and clever. 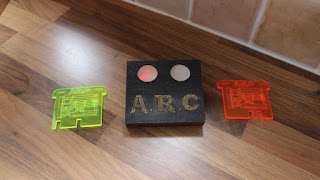 If you look really closely you'll notice that the door code is encoded on both the lock and the key anyway just in case I got them shuffled up. 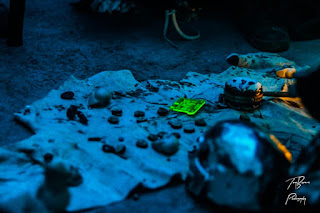