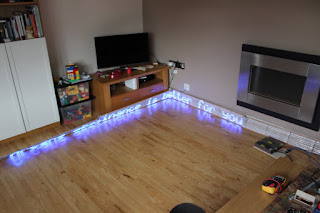 I've been slowly upgrading my Christmas lights over the last few years (and apparently not really blogging it). What started as one 300 pixel string has crept up to four pixel strings last year and I was going to add a fifth this year. The 'From Shadows' event approached with a strong venue that has power throughout and suddenly I was able to take along my light strip and put it to use displaying messages in the gaol. I purchased two more strings (because it's easier to make fonts with 7 lines) and I bought an Teensy Opto adaptor to make connecting them all up easier.

I tried previously to hang up the strips at various intervals across the distance but there was always a lot of droop in the middle and it was tricky to get all the strips lined up horizontally. This time I attached the whole length to four back boards and cable tied them every 15 pixels. This ended up with a very sturdy system where all the strips stay in alignment despite being moved around. 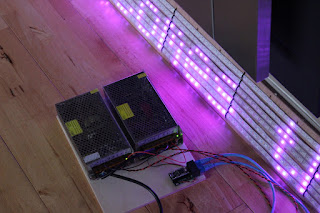 The software ended up being very basic, simply able to take a few programmed strings and output them on the strips in a range of predefined colours. It's quite cool being able to take a colour palette and use that for your colours.

Future plans involve being able to display bitmaps on the display but these strips are now a bit too big and unwieldy so I have purchased some small 8x32 panels to develop on before setting this big one up again for Christmas. 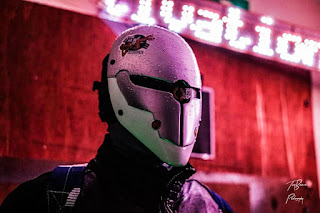