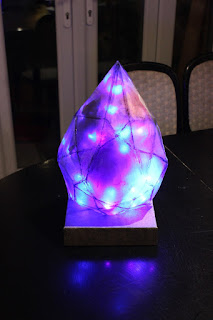 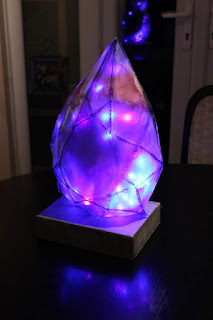 Not everything can or should be laser cut, but the laser can usually help you make the right tools for the things that can't. This ley line crystal is a perfect example. From Shadows asked if I could make a large crystal prop that represented the crossing point of several ley lines. I had a serious think about my options and almost completely forgot that I actually own a vacuum former which is nearly perfect for this job. I could simply vacuum form two half shells of a large gem, paint them and stick them together to form a suitable prop. 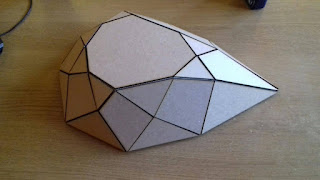 The vacuum former is a great tool for turning plastic sheets into fancy shapes but you need something to form over, if I could go down the shop and buy the right thing to form over I wouldn't need to be doing any of this at all, this is where the laser cutter comes into it's own. I found a suitable looking 3D model of a gem online, from there I used Pepakura to unwrap the model into 2D flats with tabs in the appropriate places. I exported the 2D vectors from pepakura and assembled a base cardboard model. I used 3mm mdf to reinforce each of the flat sides of the gem and I glued into the seems to fill the gaps; several applications of glue later it was mostly flush but the seams add texture to the final form anyway. 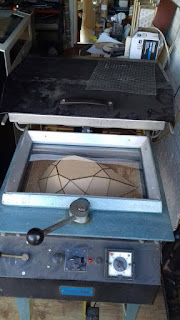 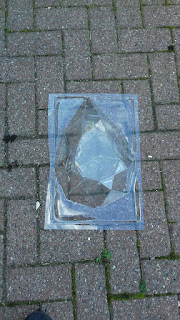 The molds were nearly too big for the former at this point so I had to heat the sheet without the mold; the additional flex of a warm sheet allowed me to stretch it up and over enough to get the form inside it. Careful appliance of heat, pressure in and vacuum out allowed me to stretch the sheet over the rest of the mold and get a solid pull out of it. This first pull gripped the form tightly, the glue had all heated up and stuck to the sheet along the seams so removing the form was a fairly destructive process. The mold was repaired (thankfully the back of the crystal is less visible than the front) and a second pull was completed. This second pull destroyed the form but the job was done and I had two halves of sheet. 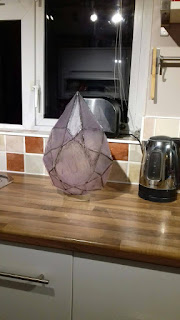 A heat gun was used to gently persuade the two halves of the shape together and make the plastic easier for cutting. The halves were made from 1.5mm HIPS plastic so it was pretty tough to cut while cold and at funny angles. The inside of the sheet was sanded to provide light diffusion, some led strings and tissue paper add some interest inside the crystal too. The seems were highlighted with acrylic wash and wiped as clean as possible. I coped out and used clear tape to secure the two halves together, when pressed securely against the plastic and bubbles smoothed out you actually had to be quite close to notice. The batteries were initially stored in the base box to provide needed weight and once the players started moving it around the batteries were tucked inside the crystal itself. 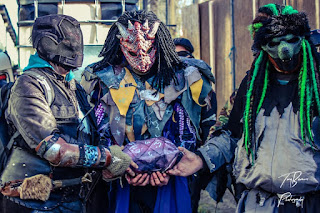