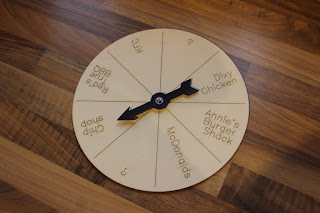 A friend was asking about the best way to make a custom decision spinner, it seemed a simple job so I offered to do it on the laser instead. The details are all simple linework so it was quick to cut, I used a 3mm bolt in the middle and put a bearing in to make it spin more freely. The arrow hand was coloured black with sharpie. I don't think the arrow really had enough weight so it didn't spin for as long as I was hoping but at least it was functional. (svg here)
365 again 3mm Laser Cut laser ply Poplar