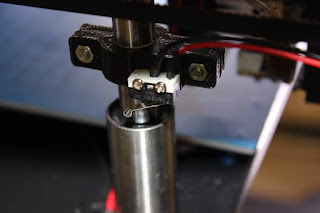 The Z axis limit switch on the Sapphire Pro has always been a bit of a concern for me, and other people who have one too apparently. The limit switch lever has a rounded end on and it is butted up against the slide bearing on the Z rod. The trouble is that the slide has a raised lip around the edge and as the lever lifts it comes off the raised edge. I've never seen any particular problems with homing on the z axis but it's not a nice design. Several people solved the problem by putting a flat surface on top of the slide but that didn't look like an ideal solution either because it's either stuck to the slide of left floating on top of it. I was left investigating the options

When I was setting up my next print the job became suddenly more urgent. I levelled the Z axis which seemed to be ok but when I started the print the nozzle drove straight into the bed and left a score across the surface, the printer registered and cancelled the print lifting the head to a safe distance. It turns out the Z bracket had cracked in two places which was enough for the whole bracket slide up the Z rod. A small grub screw applied direct pressure to the rod and was responsible for the bracket failure. I ultimately snapped the bracket off to avoid having to dismantle the printer to slide it off the end. 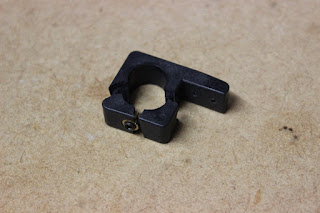 I had a vague idea for a new part so I set to work, so far I've done all my 3D modelling in Cinema4D, which is an overkill animation package but I got a copy from a cover disk (which shows you how long ago it was) and you tend to stick with what you know. Try as I might though it kept breaking the model when I tried to slice it down the middle. It was definitely time to learn a new skill. 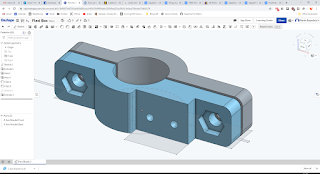 After searching round at the various CAD packages, I started to have a more serious play with onshape. I still find 'dimensioning' a bit of an odd concept and I would like to be able to select and move shapes in my sketches but after an evening of juggling I actually managed to produce a useful bracket and export it to STL ready for printing, the workspace for the project can be found here if you want to make any changes for your own project 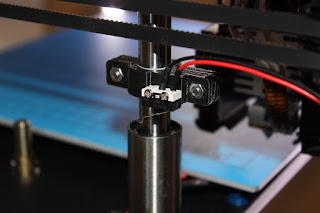 A quick 16 minute print this morning and I printed myself a replacement bracket. The Z axis lever now aligns perfectly with the lip of the linear slide and it remains on the lip the whole time, in the depressed or released positions. The bracket clamps neatly around the rod and the M3 nuts are secured in place by a tight fit to the bracket. I had to make a slight indent to the main ring to allow the limit switch to sit in the right place but having a parametric design on a decent CAD package made those changes easy to implement. The bracket works well and will obviously get a lot of use in future prints. (stl here) 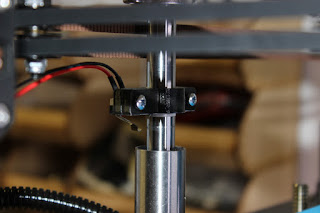