I've had a very busy 6 months since I launched my most recent puzzle box on Kickstarter. It has been very well received with most people really enjoying the design and puzzles. The Antikythera tablets sold 400 units which basically left me working solidly to fulfil them, factor in some home school and lockdown and I'm sorry I haven't posted anything for 6 months. I did however record some assembly videos of the making process and I thought it would be quite cool to collate them here in a single post.

If you're interested in purchasing your own set, they're now in stock and available to ship immediately.
https://msraynsford.ecwid.com/The-Antikythera-Tablets-p234225720 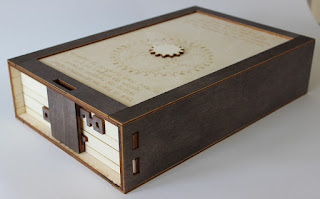 Like all good puzzles, before you can get to the actual puzzle tablets, you have to solve the lid lock to gain access to them. This is a series of slider bars that need to be removed before the lid becomes accessible. This is probably the most mechanically difficult to build and took me quite a while to perfect all the gluing steps.

The aim of the Perseus tablet is to turn the 'shield' in the centre to symbolically point it towards 'Medusa' and find the answer to the tablet. This is probably the easiest of the five tablets, although I'm pleased with how well they assemble for a complex mechanical arrangement. The only issues I get are when the base boards are warped.

This is my 'wordy' entry into the puzzle set, four heads of the hydra represented by the sliding bars, move left to right until the 'weapon' drawer can be thrust forward. The text describes how the heads should move during the battle. Chicago screws were employed to create overlapping sections between the sliders and the draw.

Theseus fought the minotaur in the labyrinth, this tablet is much more of a numerical problem. To find the solution at the centre of the labyrinth, first you have to use the string and markers provided to work out where the labyrinth is. It's a simple two part build but I really enjoy this puzzle.

This tablet was a bit of a surprise success. Like the Sisyphus myth you have to roll a ball bearing around up the hill for all eternity. I was worried that it was too simple but I was probably too close to the problem. It frustrates and delights in equal measure.

The hardest of all the tablets, at first it looks like a simple tray puzzle like I've made before but this one actually has two solutions and looking for the 'other' one means that the wood grains no longer align. Once the other solution has been discovered, the secrets hidden inside the 'wooden horse' will be revealed. 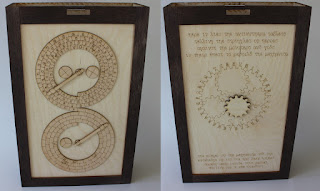 I didn't want the box to look like it had been laser cut and thankfully copying the original Antikythera mechanism provided the solution. Internally the birch wood is a standard finger jointed box but the wood stained poplar around the outside hides all of the joints. The box has an introductory paragraph encoded onto it and the final cipher hidden on it too.
So that's my little tour of the Antikythera Tablets. I've got a month or two off now to do development work and sort out a few things around the work shop so hopefully they'll be a few more posts between now and when I become overwhelmed with work again.
Puzzles